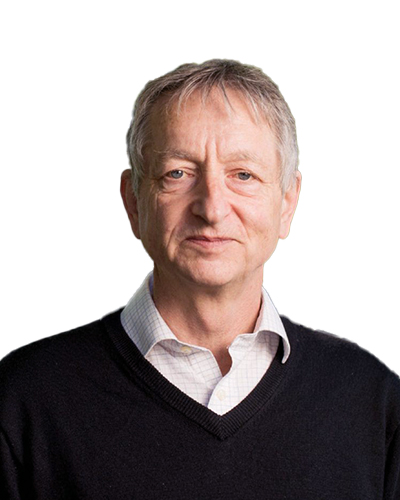 Professor Geoffrey Hinton received his PhD in artificial intelligence from Edinburgh, Scotland in 1978. After 5 years as a faculty member at Carnegie-Mellon (United States), he became a fellow of the Canadian Institute for Advanced Research and moved to the Department of Computer Science at the University of Toronto (Canada), where he is now an emeritus professor. He is also a VP Engineering fellow at Google and Chief Scientific Adviser at the Vector Institute.

Prof. Geoffrey Hinton was one of the researchers who introduced the backpropagation algorithm and the first to use backpropagation for learning word embeddings. His other contributions to neural network research include Boltzmann machines, distributed representations, time-delay neural nets, mixtures of experts, variational learning, and deep learning. His research group in Toronto, Canada made major breakthroughs in deep learning that revolutionized speech recognition and object classification.

Prof. Geoffrey Hinton is a fellow of the United Kingdom Royal Society and a foreign member of the United States National Academy of Engineering and the American Academy of Arts and Sciences. His awards include the DavidE. Rumelhart prize, the IJCAI award for research excellence, the Killam prize for Engineering, the IEEE Frank Rosenblatt medal, the NSERC Herzberg Gold Medal, the IEEE James Clerk Maxwell Gold medal, the NEC C&C award, the BBVA award, the Honda Prize, and the Turing Award.